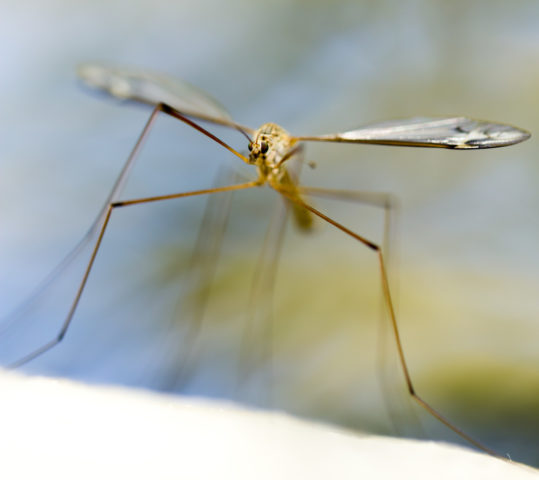 “The floodwaters that followed Hurricane Florence, which made landfall in North Carolina in September, have spawned thousands of mega-mosquitoes across the state, according to entomologists. These giants have zebra-striped legs and are two to three times as big as the normal bloodsuckers encountered during summer, said Michael H. Reiskind, an assistant professor in the Department of Entomology at North Carolina State University. “Definitely noticeably bigger,” he said. “If you see mosquitoes often, then you’re going to say, ‘Wow, that’s a big mosquito.’ The good news is that this species, called Psorophora ciliata by scientists but commonly known as “gallinippers,” are not likely to make anyone sick, Reiskind said. “They can carry dog heartworm, but in general, they don’t actually carry human diseases,” reports CNN.

“Commonly known as the American Gallinipper or the Shaggy Legged Gallinipper, this mosquito, largest in the world, is impressive in size and aggressive in nature. At about 6 times the size of the common mosquito, Ps. Ciliata inflicts a powerful bite, said to feel like you are being stabbed! The voracious female of the species seeks blood meals day and night, becoming particularly aggressive if her habitat is invaded or disturbed. Due to its large size, the Gallinipper can even bite through clothing. This pest can be identified by its unusual size (about the size of a quarter) and by the feathery dark scales on its hind legs,” explains Picardini.

Gallinipper species is native throughout the eastern United States. Under normal circumstances they are pretty rare. Hurricanes can create a large boom in the population from the flooding.

Why they are spawned after hurricanes

“The gallinippers belong to a genus of mosquitoes that specialize in responding to floods. Females produce lots of eggs, which they spread out around areas that might flood, such as wet meadows, floodplain forests or even agricultural land. Those eggs are resistant to desiccation—that is, they aren’t damaged by dry conditions—so they can wait around for a flood the following year, forming an “egg bank.” The eggs are fertilized as the female lays them, from sperm she’s stored during mating. In order to get the blood meals necessary to make many eggs, these mosquitoes are aggressive feeders on mammals, and maybe other vertebrates occasionally,” stated by Newsweek.

Gallinippers have a big proboscis (mouth part that bites) which causes a painful bite.

Picaridin reports that the “individual American Gallinippers have tested positive for West Nile Disease and various strains of encephalitis, However, at the present time the CDC does not consider the species to be a vector in the transmission of any of these diseases. The gallinipper may be a formidable nuisance but at present it does not pose a major health hazard.

Contact Us
Choose Proactive Pest Control for professional, comprehensive, guaranteed pest and lawn management. The pros at Proactive will work diligently to gain your trust, confidence, and your total satisfaction. CALL US TODAY at 770-800-PEST to schedule a free, no obligation inspection and evaluation for your home or business. Or, contact us for a FREE consultation. Let us show you why Proactive Pest Control is northeast Georgia’s first choice for pest, termite, and lawn services.