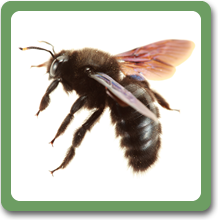 Often mistaken for bumble bees, carpenter bees are commonly found in Spring and early Summer, buzzing around eaves and around wooden porch railings. Getting their name from their habit of boring holes into wood to create nests for reproduction, carpenter bees are known around the metro Atanta area to cause substantial damage to untreated wood, especially if the insects go unchecked for long periods of time.

Color: Mostly black with some yellow markings; males have a white dot on their heads

Body Structure: Characterized by smooth, hairless abdomen. Females have stingers whereas males do not.

Characteristics: The life cycle of the carpenter bee is fairly brief, with eggs hatching a few days after being lain and reaching full maturity within 5-7 weeks. Females deposit a ball of pollen near their eggs, providing a source of nourishment for the offspring. Unlike some other bees, carpenter bees are not social insects.

Habitat/Behavior: As mentioned above, carpenter bees tend to be found hovering around untreated wood, carving out tunnels to lay their eggs. While the bees do not consume wood, the insects can cause repeat damage by returning to the same tunnels year after year. Carpenter bees are not necessarily aggressive, but males in particular will vehemently defend their nests, even though males are incapable of stinging aggressors. In addition to holes bored in untreated wood, damage from carpenter bees is often characterized by frass, or fecal matter, found around the openings.

Prevention/Treatment: Carpenter bees can cause repeat damage if left untreated. Additionally, other problematic and destructive pests, like carpenter ants, can invade holes bored by carpenter bees, causing additional structural harm. It often is difficult to discern carpenter bees from bumble bees. If you believe carpenter bees have invaded your home, you should contact a pest control professional to positively identify the species and treat for the insects accordingly. 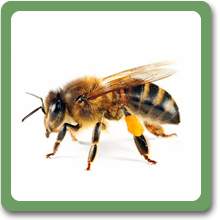 Generally a harmless insect, the honeybee will sting an aggressor should it get too close to a hive and/or act in a way that is perceived as threatening.

Body Structure: Head, thorax, and abdomen with a stinger.

Characteristics: Honeybees are social insects residing in colonies. Each colony contains a single queen, male drones, and female worker bees, which are sterile and serve to carry nourishment to developing honey bees. Drones primary purpose is to mate with the queen, after which they die. Queens can produce as many as 2,000 eggs in a day.

Habitat/Behavior: Unlike some other insects, honey bees do not hibernate, but rather remain active in their colonies during winter months, huddling together to share body heat and consuming honey for nourishment. The intricate, well-known honeycomb structure found within colonies are constructed by drones to house the queen's eggs. Commonly, nests are found in nature in hollow logs, trees, or rock formations, but occasionally honeybees may build a nest in the eaves, attic, chimney, or wall voids of structures. In general, honeybees are not patently aggressive, even when they swarm during warmer months. However, if provoked, they will attack, stinging or giving chase to an aggressor.

Prevention/Treatment: As noted, honey bees are not overly aggressive unless provoked. That said, if a nest has been built in close proximity to your home, you do run the risk being stung when honey bees swarm. For those who experience allergic reactions to stings, the results could be fatal. For this reason, you should contact a pest professional to take the proper course of action, whether it be relocating the hive or extermination, to prevent possibly dangerous stings. 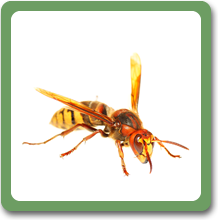 Color: Black with white markings on the head

Characteristics: Hornets are social insects, living in colonies. Queens in the colony lay eggs in the spring, building a paper comb around each individual egg. Eventually these larvae hatch into worker hornets, whose purpose is to find food, build the nest, and protect newly-hatched young. A nest may contain upwards of 500-700 workers at any given time. Males in the nest will fertilize new female queens, who then leave the nest that fall to begin new colonies.

Habitat/Behavior: Hornets build large paper nests constructed from saliva and wood pulp that often are found hanging from tree limbs, shrubs, or eaves/rafters of buildings. Nests can sometimes grow up to 2 feet in length, depending on the size of the colony. Hornets are extremely aggressive and will attack any intruder that comes near the nest.

Commonly Active: Spring-autumn Prevention/Treatment: As noted, hornets are extremely aggressive and will sting any human or animal that gets too close to the nest. For this reason, a pest control professional should always be consulted if a hornet's nest is spotted near your home. 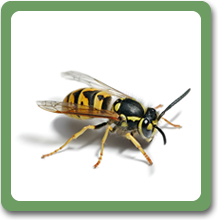 Characteristics: Yellow jackets are social insects living in colonies. Colonies are comprised of sterile female workers, males, and fertile females that mate with males in the fall to become yellow jacket queens. Fertilized queens hibernate through the winter, whereas males and workers die as the weather turns colder.

Habitat/Behavior: Yellow jackets often nest near the ground, taking over old nests and burrows made by rodents. Yellow jackets also may build a nest in the walls of a home or other structure, under porches or steps, as well as in the branches of low-hanging trees or shrubs. While yellow jackets do help pollinate other plants and serve to control other pests like flies, they are scavengers who feed on refuse. They are particularly attracted to garbage.

Prevention/Treatment: Because yellow jackets are particularly aggressive in defending their colonies, having an infestation near or around your home poses a threat the well being of your family and pets. As noted above, yellow jackets are capable of inflicting multiple stings, which may send highly allergic victims into shock.