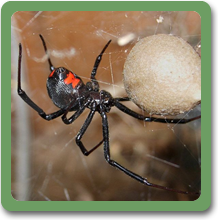 Body Structure: The female features a rounded, globe-like abdomen; the male features a smaller abdomen, yet has noticeably larger biting appendages, or pedipalps, than the female.

Characteristics: After mating, females may consume the male as nourishment needed to fertilize her eggs. Eggs are laid in silken, cup-like sacs and are vehemently protected by the female during the gestation period, which can last from 10 days to 1 month. Females can create anywhere from 5 to more than a dozen sacs, each containing up to 750 eggs. Upon hatching, the young spiders are cannibalistic, killing and eating other hatchlings to survive. Only a small number of the young spiders survive and develop into adults. The transformation into adulthood takes 2-3 months. The average lifespan of a black widow spider is 1 year.

Habitat/Behavior: Black widows nest in dark, secluded spots, such as within debris, under woodpiles, or in cracks and crevices. The female is extremely protective of her eggs and will bite if her web or nest is disturbed. The spider uses its web to trap prey, which ranges from insects to other spiders. Although the initial bite from a black widow may not cause much discomfort for a human victim, the powerful venom can begin affecting the central nervous system immediately with pain rapidly spreading throughout the body. Vomiting, chills, difficulty breathing, extreme perspiration, palpitations, and delirium are a few of the symptoms that may arise within hours of the bite. Most bite victims recover within a week; however, there is a 5 percent mortality rate associated with black widow bites with most fatalities being children and the elderly.

Prevention/Treatment: Moving debris, stacks of bricks, woodpiles, or any other clutter away from your home is a good prevention tool. Sealing cracks in foundations and around doors and windows also is recommended. If working outdoors where black widows commonly nest, make sure to wear protective work gloves. Using foggers or store-bought pesticides to control black widows is not recommended. Apart from being ineffective, the toxins in these products may harm the health of your family and pets if administered incorrectly. 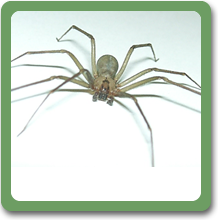 Body Structure: Body features a dark, violin-shaped marking on its back with the neck of the "violin" pointing towards the abdomen. Legs and abdomen are a solid color.

Characteristics: A female brown recluse spider produces from 1-5 egg sacs at a time, containing upwards of 300 eggs per sac. The young hatch within 2-3 months; however, it takes almost a year for them to reach maturity. The average lifespan of a brown recluse spider is a little under 2 years.

Habitat/Behavior: Apart from their characteristic markings, brown recluse spiders can be recognized by their compact, somewhat haphazard-looking webs. Brown recluse spiders also tend to build webs and nests in dark, secluded places and are nocturnal hunters, searching for food at night. Unlike most spiders, the brown recluse does not use its web to trap food. It will not bite unless its web or nest are disturbed. A brown recluse bite is characterized by an inflamed white blister, which turns purple or black over time. Depending upon an individual's tolerance to the brown recluse's venom, the reaction may be mild to severe.

Prevention/Treatment: The best way to prevent the brown recluse from nesting around your home is to eliminate clutter, such as piles of wood, bricks, debris, or garbage where the spider can hide. Also, sealing cracks around door and window frames as well as around the foundation of your home will also prevent spiders from entering your house. If you are handling debris or working around your home where the brown recluse may lurk, wear work gloves to prevent the possibility of getting bitten. If considering commercial foggers or treatments to control spiders, know that they are often are ineffective. Likewise, administering such toxic chemical treatments incorrectly may put the health of your family and pets in jeopardy. 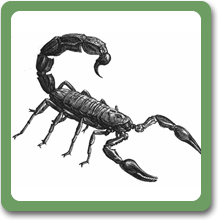 Scorpions are nocturnal arthropods which means they are active at night, searching for mates and food items. During the day they are hiding in dark areas, out of sight. Their main food sources are insects, millipedes, centipedes, other scorpions and any other small animal they can grasp and sting. They have one set of pinchers or claws, eight legs and a stinger at the end of the tail that is typically held over the back, and ready to sting for protection or killing their food. There are over 1,500 different species of scorpions that have been described.

Only about 25 are known to be a danger to humans when stung. Usually the larger the scorpion species, the less danger they pose. The smaller, the more dangerous. If you live near wooded areas, you have a greater chance of encountering scorpions than if you live in an urban area with no wooded areas nearby. Controlling insects will greatly reduce scorpions being seen in or near structures.