World’s Largest Bee Spotted for the First Time Since 1981

Pine Bark Beetles are Most Destructive Insects of Pines in Georgia 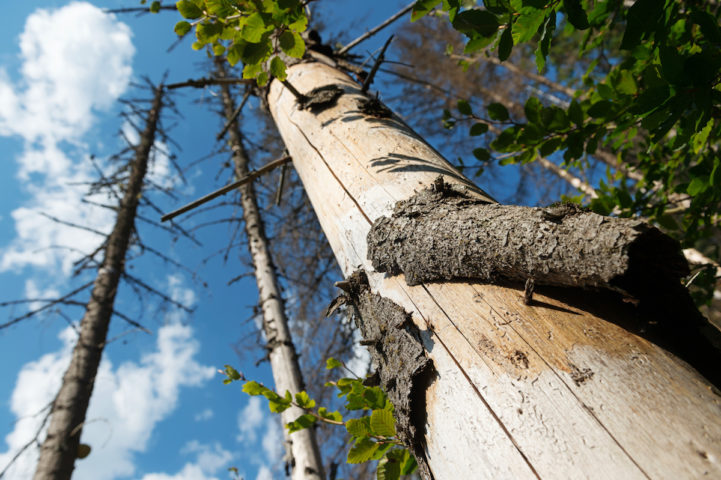 “Pine bark beetles are the most destructive insects of pines in Georgia. They occur across all land ownership patterns and geographic regions of the State. Since 1962 annual losses from outbreaks have exceeded five million dollars in the State. Six species occur in Georgia but only five are of economic importance. Records of southern pine beetle (SPB) outbreaks in Georgia go back as early as the 1700’s. Statewide outbreaks occur every 5-10 years with local, less intense infestations occurring annually.

Aerial detection is the most efficient method of locating hark beetle spots. Large forested areas can be surveyed in a relatively short period of time. From the airspots can be classified by size and type, which will aid entomologists in predicting future trends. Many small (5-10 trees) scattered spots usually indicate the beginning of a serious outbreak. As the outbreak progresses, spot size may increase 10 – 50 fold. Aerial detection and suppression surveys are an important aspect of a bark beetle prevention and control program, reports Forestpests.org.

Pine bark beetles found in Georgia include the:

The southern pine beetle is the most destructive and can kill large numbers of trees over many acres in a short period. “The southern pine beetle (SPB), Dendroctonus frontalis, is a minute (3 mm), invasive insect that is native to southeastern states and is the most destructive insect pest of their forests. Its range extends from New Jersey to Florida to Texas to Illinois.

The SPB must kill its host pines to reproduce, and attacks trees en masse. The SPB causes significant and rapid economic losses in all forest types, including traditional forests, urban forests, watersheds and viewsheds, and negatively impacts habitat for endangered species and recreational areas. In addition, human safety and property are threatened by SPB-killed trees, which may be susceptible to fire and whose removal costs usually exceed the tree’s value, explains the U.S. Forest Service.

This beetle attacks all species of southern yellow pines of sapling, pulpwood and sawtimber size. It is particularly destructive in overmature and overcrowded stands. Infestations are often caused by extended droughts, flooding, lightning strikes, and man caused disturbances.

Black turpentine beetles and ips beetles are probably seen by landowners most often year in and year out. To avoid or minimize bark beetle damage, it is important to have a basic knowledge of the insect and to be capable of identifying the problem.

BarkBeetles.org comments that “the black turpentine beetle, Dendroctonus terebrans (Oliv.), has caused extensive losses throughout the pine belt in the Southern States. It has been found aggressively killing trees from Texas to Virginia and southward through Florida. The beetle most commonly kills less than 10 percent of the stand during a single season, but on several occasions in north Florida and south Georgia it has killed more than 25 percent of the stand in a single season. It appears that these wide-spaced activities of the beetle may be associated with low tree vigor resulting from drought, flooding or severe stand disturbances caused by mechanized logging. All southern pines are attacked, but the most severe infestations have occurred in stands of slash pine (Pinus elliottii) and loblolly pine (P. taeda) and, to a lesser degree, longleaf pine (P. palustris). Freshly cut stumps are usually preferred for breeding, whereas freshly cut logs are rarely attacked. The beetle also shows a preference for weakened trees, such as those damaged by fire, worked for naval stores, or infested by other bark beetles; but it is capable of severely attacking apparently normal, healthy trees”.

“These beetles can multiply rapidly in fire or storm damaged timber, in logging slash or along powerlines in recently pruned pines. Duration of IPS outbreaks is usually short-lived (3-6 months), and they are not as widespread as SPB outbreaks. Trees attacked by SPB are often attacked by one or more species of IPS. The IPS engravers tunnel underneath the bark of living trees producing galleries that are characteristic of each species. Blue staining fungi are also introduced into trees by the IPS.

IPS outbreaks in recreational and urban areas can be devastating in overmature trees. During the summer of 1980 the 4 and 6 spined Ips killed over 30,000 board feet of shortleaf and loblolly pines along the fairways of an 18-hole golf course. This particular local outbreak was started by a few lightning strikes. It was intensified by drought. Statewide, Ips outbreaks accounted for 12,000 cords and over 490,000 bd. ft. of timber being salvaged during 1980.

Trees can be protected from Ips attacks by spraying the entire trunks of trees. The same insecticides that are recommended for the SPB are also registered for use against Ips beetles,” states Forestpests.org.

“Currently four methods of control are being recommended in Georgia. These are salvage, cut and leave, cut and spray, and pile and burn. Another method which involves the use of behavioral chemicals is being tested throughout the south. Based on preliminary results this method may prove to be an alternative in controlling small isolated spots.

Salvage is the removal of all infested trees along with a buffer strip of green uninfested trees. It is the most practical and effective method of control when the demand for timber is good. Salvage is not effective when:

Cut and leave is the felling of all infested trees, plus a buffer of uninfested trees toward the spot center and leaving them. This method has been shown to disrupt spot growth during the warmer months (May-September) but should not be used on spots having over 50-100 infested trees.

Chemical control is used on a very limited basis and is recommended only for spots having fewer than 20 trees. The chemicals that are registered for bark beetle control are restricted use pesticides and can be applied only by licensed pesticide applicators (see appendix).

Pile and burn is an effective control method for small spots but is seldom used because of the time and expense involved in doing it.

If pre-commercial stands become infested, good control can be achieved by knocking all the trees down and burning.

Control in Lawn and Shade Trees – Trees that have been mass attacked by southern pine beetles cannot be saved by the application of an insecticide to the outside bark or by injecting it into the tree. Homeowners need to be aware of unscrupulous persons advocating the use of systemic chemicals for the control of any pine bark beetle. Research has yet to prove the efficacy of these compounds.

The most important step in stopping a beetle infestation in a yard is to remove all infested trees. Residual healthy trees can be protected by the application of an approved insecticide to the entire outer bark surface of the trunk (Figure 8). Tree companies are often limited by their spray equipment and can only spray up the tree about 15 feet. This will not be effective in preventing attacks from the southern pine beetle or Ips engravers,” reports Forestpests.org.

Have some pest or termite needs? We would love to earn your business! Please let our team of professionals help you. Don’t spend your valuable time dealing with things that we can handle for you. If you’re in any of the surrounding areas, give Proactive Pest Control a call at 770-800-PEST or 770-800-7378.

Contact Us
Choose Proactive Pest Control for professional, comprehensive, guaranteed pest and lawn management. The pros at Proactive will work diligently to gain your trust, confidence, and your total satisfaction. CALL US TODAY at 770-800-PEST to schedule a free, no obligation inspection and evaluation for your home or business. Or, contact us for a FREE consultation. Let us show you why Proactive Pest Control is northeast Georgia’s first choice for pest, termite, and lawn services.