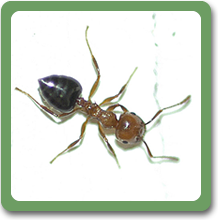 Body Structure: Head, two spines on thorax and heart-shaped abdomen when viewed from above

Characteristics: When an acrobat ant is disturbed, it raises its abdomen over its head and thorax in a threatening manner, hence its name. Likewise, worker ants will emit a foul odor and may bite when disturbed. Colonies are formed by flying ants, or "swarmers," anytime from May to September.

Habitat/Behavior: Acrobat ants nest in moist, damp areas, from rotting logs to tree stumps. Often, acrobat ants will nest indoors wherever damp, damaged wood is present. They also may nest in Styrofoam insulation, wall voids or in the abandoned nests of termites or other wood-boring insects. In the wild, acrobat ants feed on other insects and honeydew. Indoors, they seek out sugary, sweet food items.

Prevention/Treatment: As with most ants, keeping food prep and dining areas free and clear of food debris is a good way to prevent acrobat ant infestation. Caulking cracks and openings around door frames and around pipes also can help block acrobat ants from entering your home. Presence of acrobat ants may indicate a larger moisture problem in your home. Also, tracking acrobat ants' trail back to the nest often is difficult. It is recommended that a pest control professional inspect your home to find the actual source of infestation. 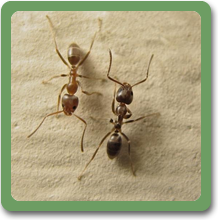 Characteristics: Argentine ants are social insects that reside in colonies often featuring multiple nests. Unlike other species, Argentine ants are not aggressive toward ants from other neighboring colonies, which allows colonies' numbers to grow and multiply exponentially.

Habitat/Behavior: Argentine ants often are found in mulch or soil, nesting only 1-2 inches beneath the surface. They also are found under debris, rocks and lumber. Indoors, Argentine ants nest in wall voids, insulation and pipes or drains. In the wild, they feed on insects and honeydew; indoors, they are drawn to any food remains, especially sugary foods.

Prevention/Treatment: Argentine ants are attracted to food residues, especially sugary foods. To prevent infestation, the best course of action is to make sure areas where foods are prepared or consumed are free of all residues. Often, it is reported that bait containing boric acid is an effective treatment for Argentine ants, with worker ants theoretically carrying the tainted bait back to the nest and exterminating the colony in turn. However, the treatment can backfire if the concentration of boric acid in the bait is too high, causing worker ants to perish before making it back to the nest, rendering the whole treatment futile. For this reason, it always recommended that a trained pest control professional treat Argentine ant infestations. 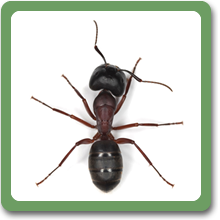 Color: Black to reddish to orange to black/red combinations

Body structure: Head, thorax and abdomen with a small node on pedicel

Characteristics: Generally there is a single queen in the colony but often supplementary queens as well. Colonies typically are around 15,000 workers when mature, but potentially could be over 100,000 workers. Foods are both carbohydrates and protein, with insects a major part of the diet.

Habitat: The usual habitat of a colony of carpenter ants is within wood, often wood buried or partially buried in the soil. They also commonly establish "satellite" colonies that may be in a structure, maintaining contact between the two colonies with the workers who travel to and from over well-defined trails. 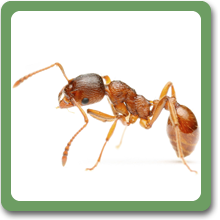 First introduced to the Southern United States in the 1920s, fire ants are characterized by their copper color and painful bite/sting, which can leave red or white welts on the skin and, in some cases, trigger fatal allergic reactions. Although commonly found in open fields and pastures around metro Atlanta, fire ants are home invaders and are drawn by sugary and fatty foods.

Body Structure: Head, thorax and abdomen with stinger on end of abdomen

Characteristics: Fire ants reside in colonies, which often can contain more than 100,000 ants. The average lifespan of a worker fire ant is five months, whereas queens can live up to seven years. In a day, queens can lay thousands of eggs, with fire ants going from larva to adulthood in approximately 30 days. When a colony has a well-fed queen and the colony grows rapidly, queens may leave the colony with worker bees to establish new colonies nearby.

Habitat/Behavior: Fire ants prefer warm, dry surroundings and are often found in open fields or unshaded lawns. Fire ant mounds can grow to sizes of more than two feet in diameter and almost a foot high. That said, fire ants may also build shallow mounds within soil or piles of mulch, making the colonies less easy to detect with the naked eye. Fire ants are intensely protective of their queens and will aggressively attack any animal, including humans, who come in the vicinity of a mound. Fire ants attack the invader by first clamping down with their mandibles and then injecting venom via their stingers.

Prevention/Treatment: As noted, fire ants are extremely territorial; they will attack if threatened. Trying to treat a fire ant mound with granular pesticides yourself not only may be ineffective, but this also puts you in danger of being attacked. If you spot a fire ant mound on your property, the best course of action is to contact a pest control professional who is trained to safely identify, treat and eliminate fire ant colonies. 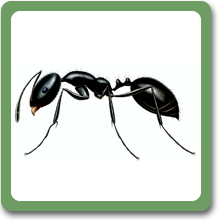 Characteristics: Colonies can range from moderate to large in size and may feature multiple queens, which are 2-3 times the size of worker ants.

Habitat/Behavior: Little black ants like to nest in moist areas. Outdoors, they commonly are found beneath lumber, in mulch, in rotting logs or beneath debris. They feed primarily on honeydew, pollen and other insects. Little black ants often are drawn indoors if the outdoor food supply runs low and are particularly drawn to sugary items, bread and meat. They can invade wall voids, spaces beneath carpeting, spaces behind bricks and other crevices.

Prevention/Treatment: As with other species, black ants are drawn to food remains. Keeping food preparation areas and anywhere food is consumed free of food residues is a key measure to prevent infestation. Also clearing debris and filling cracks around the house may also prevent infestation. While store-bought baits may appear to curb an infestation, often baits will kill the worker ants before the bait is taken back to the nest, meaning the colony continues to survive even after treatment. For this reason, it is recommended that a pest control professional inspect your home and administer professional treatment to eliminate these pests. 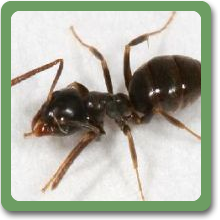 Body structure: Head, thorax and abdomen with a small node on pedicel that is slightly hidden by the abdomen

Characteristics: Odorous House Ants are social insects that thrive in colonies, often with multiple queens and up to 100,000 worker ants in a single colony. The name is derived from the fetid odor, similar to rotten coconut, that is released when the insects are crushed.

Habitat/Behavior: Commonly nest outdoors in mulch, rotting logs, boards, debris and under sidewalks/concrete. However, they also can be found nesting indoors in wall voids, between window frames and in cracks and crevices. Feeding on honeydew in the wild, Odorous Ants often invade homes where they can find sugary food residues.

Prevention/Treatment: One can prevent odorous house ant invasions by making sure any food residues, particularly those from sugary items, are cleaned up. Odorous house ants tend to travel in large numbers, and even though infestation may seem to disappear after administering treatment, there often are thousands more lurking. For this reason, it is best to contact a pest control professional who can locate the colony and treat the problem at its source. 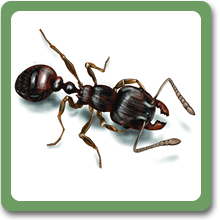 Body Structure: Head, abdomen and thorax with two spines on pedicel and stinger at end of thorax

Characteristics: Generally slow-moving. New colonies are formed in the Spring when winged pavement ants, or "swarmers," mate and reproduce.

Habitat/Behavior: Colonies tend to nest near sidewalks or pavement, hence the name. Presence of nests can be evidenced by soil mounds found between sidewalk cracks or near the edge of pavement. They also can nest in hollow concrete block foundation walls or beneath concrete slab foundations. Outdoors, pavement ants feed on honeydew and dead insects. Indoors, they tend to seek out sugary or greasy items and can be detected by trails of worker ants searching for food.

Commonly Active: Swarm in the late Spring and early Summer.

Prevention/Treatment: Pavement ants tend to be drawn by fatty or sugary foods; so, keeping food preparation and dining areas free from food debris is a good step toward preventing infestation. Although not particularly aggressive, pavement ants may bite and sting if provoked. Also, locating pavement ant colonies is difficult, even though their mounds often are clearly visible on sidewalks and near home foundations. Therefore, it is recommended that a pest control professional inspect infested areas in order to locate and treat the true colony location.