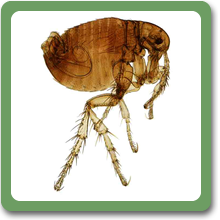 A common threat to dog and cat owners in the metro Atlanta area, fleas often attach themselves to family pets, feeding on their blood. Not only a menace to pets, fleas also can feed on human blood and are known carriers of several diseases, including typhus and tularemia.

Body Structure: Wingless, flat body that is covered in spines with three sets of elongated legs and biting mandibles

Characteristics: Using their elongated legs, fleas can jump as much as 7-8 inches vertically and 14-16 inches laterally. Fleas are ectoparasites, meaning they reside on the exterior of the body and feed on the host animal's blood to survive and lay eggs. A single female flea can lay an average of 18 eggs per day. Unlike many parasites' eggs, flea eggs are not sticky, and although fleas initially lay eggs on their hosts, the eggs fall to the ground where offspring begin the life cycle. Eggs hatch into larva within 12 days, and larva develop into cocoon-surrounded pupae within a two-week span. The pupal stage can last anywhere from 3 days to one year, depending upon environmental conditions. When fleas emerge as adults from the pupal stage, they immediately begin seeking food. Female adults begin laying eggs within 48 hours of their first feeding.

Habitat/Behavior: Fleas are parasites that commonly attach themselves to wild and domesticated animals, feeding on hosts' blood for nourishment and reproduction. Pets, like dogs and cats, often acquire fleas while playing outdoors. As mentioned above, eggs are laid superficially on the host's fur but then fall to the ground where the flea larva begin their life cycle, feeding on organic debris and detritus. Adult female fleas commonly feed and lay eggs while a host is sleeping, therefore infestation often will be found near a pet's bedding area.

Prevention/Treatment: Although so-called "flea bombs" are touted for eradicating infestation, they are highly toxic and often not 100 percent effective. Residues can remain on furnishings and carpeting even after the chemical fog has dissipated. Also, the pesticide may not penetrate cracks and crevices or under furnishings, leaving the infestation partially untouched. It is recommended that a pest control professional be consulted before using a flea bomb. 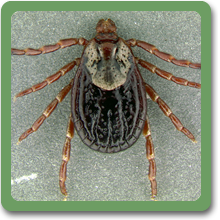 Characteristics: A female American dog tick will engorge herself with the blood of her mammalian host before falling to the ground to lay eggs. Sustaining herself for 3 weeks on the collected blood, she deposits tens of thousands of eggs in a secluded location then perishes. When eggs hatch, the larva go in search of food, often mice and vermin. After gorging themselves with blood, the larva fall from the host, molt and move to the nymph stage of development. Again, the nymphs will search for a new host and engorge themselves before molting and emerging as a mature adult. In ideal climate conditions, the process from gestation to adulthood takes about 3 months. Although, the development process can take up to 2 years.

Habitat/Behavior: Because American dog ticks require blood to survive in each stage of the life cycle, they can be found living in close proximity to mammalian hosts in moist, wooden environs. If American dog ticks make their way inside a home, they commonly can be found residing in potted plants or near pets' bedding. Common to the metro Atlanta area, American dog ticks are known carriers of several diseases, including Rocky Mountain Spotted Fever. When feeding on victims, they inject an anticoagulant that allows blood to stream freely and may simultaneously infect their victims with deadly bacteria. Incubation for Rocky Mountain Spotted Fever is about 1-2 weeks following a bite. Symptoms can include fever, chills, nausea, and a spotted rash.

Prevention/Treatment: If heading outdoors, spraying one's clothing and shoes with a pest repellent spray containing DEET will help ward off American dog ticks. Also, checking pets regularly for ticks will help prevent indoor infestation. If an American dog tick is found on your body, use tweezers to remove it, tweezing it as closely to its mouthparts as possible. Do not squeeze the body of the tick, as it will cause the parasite to regurgitate, pushing pathogens into the wound. Because American dog ticks are prolific reproducers, do-it-yourself methods of tick control often are hit-or-miss. If you suspect an American dog tick infestation, contact a trusted pest control professional for a thorough home inspection and course of treatment. 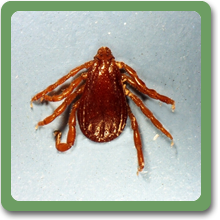 Characteristics: Female adults when fully gorged with host blood may produce as many as 500,000 eggs, laying them in secluded cracks and crevices. The female coats the eggs in a secretion to keep them from drying out, and then dies after completing this process, which may take as long as 15 days. When the eggs hatch, the larva go in search of food, gorging themselves on a host until molting, upon which they enter the nymph stage. Here again, nymphs will seek a new host, gorging themselves on blood until molting and emerging as an adult. In indoor/enclosed environments, young ticks will gorge on the same animal instead of finding new hosts. Furthermore, the brown dog tick is unique in that it can complete the entire life cycle indoors.

Habitat/Behavior: In the wild, brown dog ticks can be found residing on tall grasses or vegetation, where they wait to attach themselves to a passing mammalian host. While they will feed on animals such as rabbits or deer, they prefer dogs, hence the name. Generally, adult brown dog ticks will attach themselves just behind a pet's ears or between its toes. Initially infestation may go undetected. It is often during the larval stage, when the undeveloped young disperse in search of food, that one will see thousands of offspring, crawling in and around a pet's bedding area. Like its counterparts, the brown dog tick is also a vector pest, capable of transmitting disease, including Rocky Mountain Spotted Fever.

Prevention/Treatment: Checking pets and their sleeping areas for ticks is a good preventative measure. Likewise, if spending time outdoors, spraying your clothes and shoes with a pest repellent containing DEET will help protect you from the parasites. Although brown dog ticks more commonly feed on pets rather than humans, if you find a tick on your body, remove it by using a tweezers, pulling it from your body as close to its mouthparts as possible. Should you experience any fever, nausea, profuse sweating, or adverse reaction to the bite, seek medical attention immediately. If you suspect infestation in your home, refrain from do-it-yourself treatments. Brown dog ticks multiply quickly and are difficult to eradicate. Contact a pest control professional to inspect your home and implement a proper course of treatment. 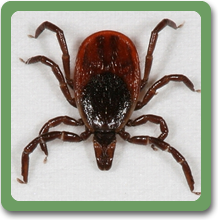 Characteristics: The female deer tick will gorge herself on a host's blood, often feeding for more than a week, before falling to the ground and laying her eggs in a secluded, protected spot. After laying a mass of more than 1,000 eggs, the female dies. When they hatch, the larva feature six legs only and immediately go in search of hosts for nourishment. (It is during the larval stage of development that deer ticks contract the bacteria that cause Lyme disease.) After feeding on a host for 4 days, the larva will fall to the ground and molt. The resultant nymphs have eight legs. Here again, the nymphs go in search of blood and feed until molting again, at which point they emerge as fully-formed adults.

Habitat/Behavior: Typically found in the wild residing on the tips of leaves or grass, deer ticks prefer the blood of white-tail deer, hence the name. However, deer ticks also will feed on small mammals, vermin as well as humans and pets. When feeding, the deer tick injects an anti-coagulating agent into its host that allows the tick to feed freely on the victim's blood. It is at this time that the tick infects the host with bacteria that can cause Lyme disease. It is important to note that ticks do not jump like fleas. Mammalian hosts actually pick up a tick by brushing against grass or plant life upon which a waiting deer tick resides.

Commonly Active: Active throughout the year if conditions are mild, but typically from early Spring to late Autumn.

Prevention/Treatment: If working or playing outside, spray clothing and shoes with an insect repellent containing DEET. Also, wearing long-sleeved, close-fitting clothing in forested areas can help prevent ticks from biting your skin. That said, on human hosts, most ticks are found attached at the nape of the neck, just below the hairline. Because deer ticks are so minute--about the size of a sesame seed, they are difficult to spot. Furthermore, deer tick bites are not accompanied by the redness and discomfort associated with dog ticks; however, the bite still can transmit disease, in particular Lyme disease. If you find a tick on your body, remove it with tweezers as close to its mouthparts as possible. Do not squeeze the body of the tick or touch it with a burned match, as this can cause the tick to regurgitate, pushing dangerous bacteria into the wound. If you are concerned about deer ticks affecting the well being of your family and pets, contact a trusted pest control professional to find out proper treatment options. 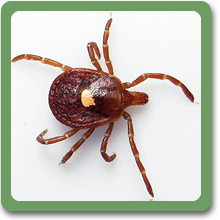 Color: Solid brown; females possess a white star-like dot in the middle of their backs

Characteristics: Like other ticks, the lone star tick is parasitic and requires blood of a host animal to reproduce. Female adults will gorge themselves with a host's blood before dropping to the ground and depositing clusters of thousands of eggs. Males, who may mate with several females, die after mating. Likewise, females die after they have laid their eggs. When eggs hatch they release larva, which often are referred to as "seed ticks." Seed ticks, which feature just 6 legs at this point, immediately seek a host upon which to feed. After feeding on the host, the seed tick will fall to the ground, molt and emerge as a nymph with 8 legs. The nymph repeats this process, and finally emerges as an adult. The entire life cycle may take up to 3 years to complete.

Habitat/Behavior: Lone star ticks live in wooded environments and can be found anywhere animals feed or rest. In general, young lone star ticks feed on small mammals, birds and rodents, whereas nymphs and adults will feed on cattle, horses or deer. Larva, nymphs and adults all will feed on human blood. When feeding, the lone star tick attaches its barbed mouthparts to the host and injects an anticoagulant to allow blood to flow. Like other ticks, they are vector pests and can transmit pathogens to a host, including bacteria that cause Rocky Mountain Spotted Fever. Often, the bite of a lone star tick is will go undetected

Prevention/Treatment: If spending time in wooded areas around your home, spray your clothing and shoes with a DEET-containing pest repellent. If you find a lone star tick on your body, remove it using a tweezers, plucking it from your body as close to the tick's mouthparts as possible. Do not crush or squeeze the tick's body, otherwise whatever pathogens it is harboring may be injected into the wound. If you experience nausea, vomiting, disorientation, profuse sweating, rash or onset of paralysis, seek medical attention immediately. If you are concerned about lone star ticks around your home, please consult a pest control professional.