Everything You Need to Know About Fire Ants 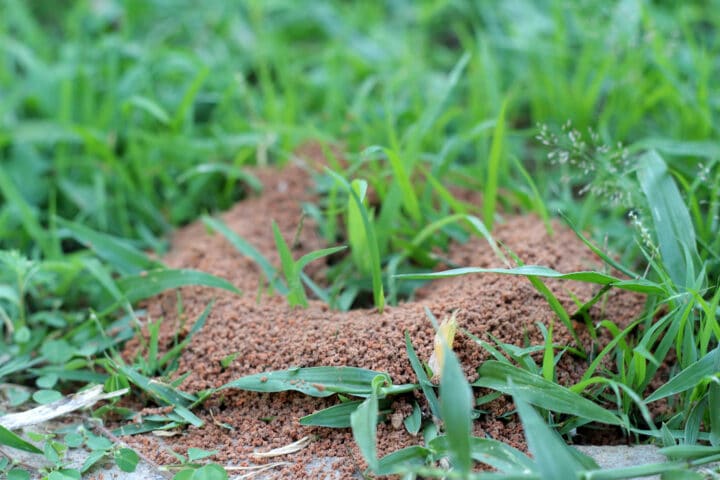 Fire ants measure up to their name. The aggressive insects’ stings trigger uncomfortable welts that can lead to severe allergic responses. And they aren’t going anywhere anytime soon. Studies suggest that fire ants infest more than 325 million acres across the southern United States and sting more than 20 million people per year.

Fire ants start emerging when temperatures reach between 70 and 95 degrees and mostly come out at night. A fire ant has a dark, reddish-brown color on many of its body and head, however, the abdomen appears darker in color. If fire ants are disrupted, they can be aggressive and attack people, unlike normal ants.

The Red Imported Fire Ant made its way into the U.S. during the 1930s. The port of Mobile, Alabama is among the largest seaports in the U.S., receiving container ships from all over the world. There are also public and personal terminals along the coast. It’s not tough to see how invasive species discover their way to brand-new parts of the world.

Fire ants don’t hibernate, and lots of ants make it through severe conditions such as floods, typhoons, and incredibly low temperatures. They increase really fast and the nest recovers rapidly. Prior to you buying a new home in an area known to have fire ants, you need to have an evaluation performed by a reliable home insect control service to guarantee there are no nests on the property.

Fire ants have a copper brown head and a body with a darker abdomen. The red imported fire ant is more aggressive than the majority of native species.

How to Spot a Fire Ant Mound

There are many species of ants that are native to The United States and Canada. Particular species have actually been introduced from other nations to fight other types, such as termites. Ants can be found in varied tones of black, brown, and red, and numerous aren’t much more than a problem that can be eliminated with insect control methods.

Fire ants set themselves apart in both looks and the way they build their homes. They are tiny little red ants and they build massive mounds.

Fire ants will build a mound that can be as much as three feet high or larger. Keep in mind that they do not live just within their mound. Rather, they can take a trip 100 yards from their mound searching for food.

One queen can lay 1500 eggs each day and 10 to 15 percent of those stung by fire ants experience severe localized allergic responses.

Big well-developed mounds might need several treatments to totally eliminate. Then a broadcast application of bait must be spread out around the yard in the fall to kill any remaining ants. Fire ants believe the bait is food, making the time of bait application essential to the success of the treatment.

Bring Toys and Other Items Inside Everyday

Fire ants are good at finding hiding places to put their mounds. It’s not unusual to see a mound pop up overnight underneath a bike or other toy left in the yard.

Make sure to either move these items inside or off of the ground so they are difficult to gain access to. Due to the fact that fire ants can pose a severe health threat, specifically to kids or those who are allergic, it is essential to remove them right away and avoid their bites whenever possible.

Treating Bites and Getting Rid of Your Fire Ant Problem

While their bites are agonizing to everyone, just a small portion of individuals are allergic. Just like a bee sting, a fire ant sting can be serious, even lethal. Deal with the stings as you would other pest stings or bites using a non-prescription item. Keep the injury clean and intact to avoid infections.

Bait is most effective within the first couple of days of application. It is likewise essential to apply the correct amount. With the majority of baits, 1 to 1.5 lbs. per acre works well. When treating specific mounds do not place the bait on the mound. Consistently spread out the bait 3 to 4 feet around the mound for the best results.

It’s best to call an outside bug control service when a nest is discovered in an area where they might communicate with individuals, or in a pasture with animals. Professional pest control teams can apply a treatment for season-long control of fire ants.

Call a regional insect control company, like Proactive Pest, to recognize and eradicate the ants. Natural pest control in Georgia can eradicate the fire ant colony with eco-friendly items. If RIFAs have been discovered in the area where you live, it would be wise to call an insect control service to bait the area around your home to avoid colonization prior to it has a chance to begin.

Keep your yard and your health in excellent condition this year without fire ants. Contact Proactive Pest Control today to get proactive in your fight against fire ants.